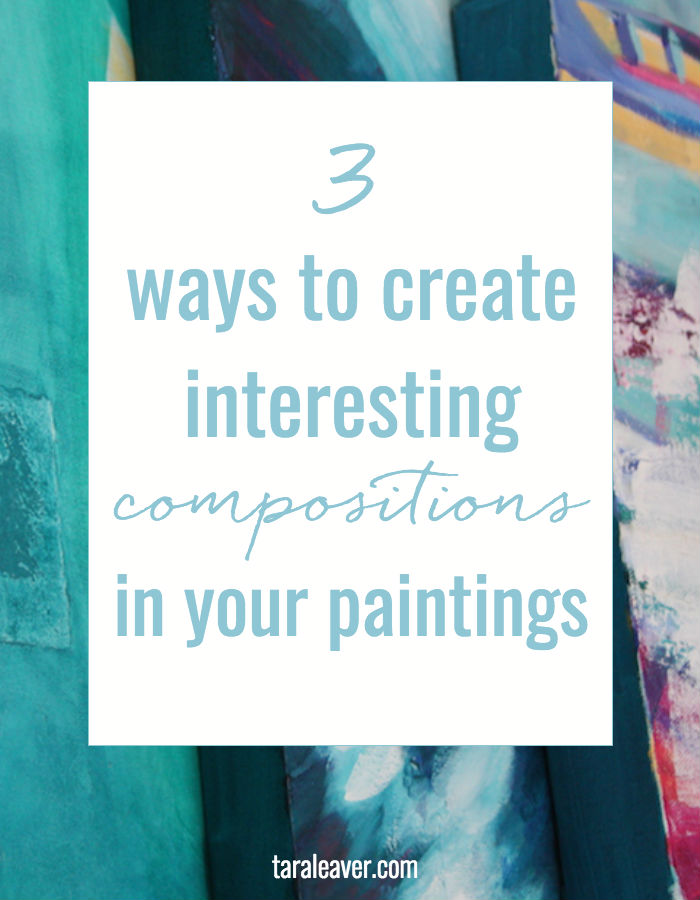 You might know that I don’t like to get too technical about painting and drawing. For me it’s primarily about revealing and developing yourself through your art, so that what you bring into the world is a true expression of you.

However, without some level of understanding of the basics, it is much harder to create paintings that ‘work’. Personal fulfilment and satisfaction is paramount, but some of that comes from making art that ‘makes sense’ to both left and right brain.

Generally speaking I think a lot of the time we know a great deal of the theory instinctively. I believe we all know what feels good and balanced and what doesn’t, even if we don’t or can’t put words to it. And when we paint we’re automatically tapping into that part of ourselves that naturally leans towards this balance.

However, instinct may not teach us everything, and filling in the gaps in our knowledge and understanding about the theory side of things can still seem like a bit of a chore. {Or maybe that’s just me?!} But you can still get a good grounding in the basics in a way that doesn’t feel stressful and like you’ll ‘never get it’ or know how to use it.

With that in mind, today I’m going to look at three ways to create interesting compositions. Easy to understand and implement, no degree required! {Which is fortunate, as I don’t have one.}

There are quite a few ways to create a pleasing and balanced composition, so I’ve picked just three of my favourites to share with you today.

Simply meaning layers, this type of composition lends itself well to both stylised or uniform patterns and a more blended, expressive approach, as you can see below in my painting ‘Escape’. It can also operate on a more metaphorical level, giving a sense of layers of meaning or the layered nature of human psychology, for example.

Full disclosure: I actually learned about strata as a specific composition after creating this painting, proving my point about our natural tendencies to create harmony in our work. Here’s a painting by Emil Nolde {Marsh with Farm} that demonstrates the strata composition: Richard Diebenkorn’s ‘Ocean Park No 117’ uses strata in a much more defined way: s or z shape, or tunnel

This one is very effective and fun to use! As the name suggests, it calls for creating a straight path, or a curved or rigid zig zag that leads the eye into the distance, giving an impression of depth. It’s great for landscapes, although not limited to them.

Here’s my painting, ‘River’, that demonstrates this composition in effect. You can see I took a step or two over the boundary of landscape into ‘abstractifying’ it. ‘The Scream’, by Edvard Munch, shows both the tunnel and the s shape, and even a bit of strata, if you ask me. :) Here’s a painting by Karl Schmidt-Rottluff, ‘Dangast Landscape‘, which demonstrates the tunnel composition {essentially a triangle that points into the distance – you can have some fun playing with placement, size and angle}: Simply put, by mentally {or literally, if that helps} dividing up your canvas into nine equal sections, and placing your focal point where the lines cross over each other, it will create an image that complies with the rule of thirds. The fact that it’s called a ‘rule’ need not put you off – it’s more of a guideline than a strict rule, and can definitely be played with.

Generally speaking that will mean that your focal point is off centre, and the eye finds this harmonious to look at, so it’s an easy way to make a painting work without too much effort.

My painting, ‘The Diver’, roughly uses the rule of thirds, and again, I did not consider this consciously before doing it! If you put an imaginary grid over the painting, the boy lines up roughly with the top horizontal line, and his shadow also roughly with the right vertical. {There tends to be some dispute as to whether the rule of thirds is the same thing as the Golden Section, but in the interests of keeping things simple and focusing on ‘fun and easy’ over ‘controversial and potential minefield’, we’ll just stick to one today!}

Another example of a painting using the rule of thirds is Van Gogh’s ‘The Sower’: The figure sits where the top horizontal and the right hand vertical lines would cross, and the wheat stalks run along the top horizontal. We also have a bit of the tunnel in action with that triangular path pointing up towards the horizon. And here’s Monet’s ‘The Summer, Poppy Field’: Notice how the tree sits where the left hand vertical would be. {There’s also some use of the tunnel composition here, with the pathways of flowers that point into the distance.} Do you have a favourite composition? Take a look at your past work and see what composition you most use, even if you’re not necessarily aware of it! In Abstractify we go into these kinds of basics in a little more depth, to gain a really good grounding from which each of us can create our unique art. Click the image on the left for all the details. The course runs in January/February, so if that’s not now, you can sign up to be alerted when it next opens!

I create practical, fun, process oriented online courses that guide you to confidence, clarity and freedom of expression in your art.

If you're looking to uncover and develop what's unique about YOUR artistic voice, or to loosen up your art, that's what we do around here. Thank you for visiting!