from spark to bonfire: the evolution of a creative process

{Today I’m taking part in a blogging carnival via fellow artist and author Lucy Pearce in honour of her book, The Rainbow Way. Check out the links at the end for lots of other creative posts!}

When I was first excavating my inner artist from her years of lying dormant and neglected, she was a little creaky to say the least. Keen and curious, but creaky.

As is my way when my curiosity is piqued, I dived in head first without giving it much thought.It was messy and joyful. I tried EVERYTHING. I took classes in painting techniques and styles from grungy mixed media to whimsical portraits, learned what gesso was and how to use it, tested ideas, got paint under my nails. early days when the table {and floor} was my studio

And of course after a while, when the first flush of the shiny new {old} thing was becoming a more familiar habit, the frustrations began to come knocking. The doubts and fears, the ones we all get but somehow believe no one else does.

Of course there were worries that I wasn’t any good, that I’d never ‘get anywhere’ with it, that my dream of earning a living being creative would never actually happen. I don’t know a single artist {and I know quite a few now!} who hasn’t experienced this.

But the one that plagued me consistently for a long time was that I  found that my creative process was erratic.

I always thought that ‘real artists’ were consistent, prolific and constantly successful. {I know, hysterical.}

I was consistently INconsistent in both style and subject matter, prolific only in unpredictable bursts, and the quality, well, let’s just say it wasn’t always quite what I’d hoped for.

I was bugged by all this for a long time. In retrospect I made it a bigger deal than necessary, but in a way I’m glad of that because it prompted me to learn more about myself, my processes, and now it gives me compassion when I come across others who struggle with the same internal conflicts.

I wrote about it often on the blog. I’m very thinky, and I tend to believe everything can be ‘worked out’ if I just figure out the right system, or the perfect solution. Again, that’s now something I’ve learned to embrace about myself in a softer way; my endlessly curious and persistent mind that believes in solutions. one step up: the spare room studio

I just had to separate the healthy curiosity from the less healthy frustration and ‘pushing’ energy.

One time I decided to test an idea I called ‘immersion week’, where I shut myself off from all outside creative influences, holed myself up in my studio and carefully observed myself, my work, how I approached it, recurring themes, symbolism, colour choices, you name it.

It was an interesting week, and involved less painting than I’d envisaged. It taught me a lot about my process.

But the one thing that’s taught me the most about what my natural process is and how to make the most of it? Don’t get mad, but it’s TIME.

Yeah, that. Which requires persistence, patience and trust.

At this point, five years on from the first creaky unfurling, I know when I’m peaking and when it’s time to rest {mostly}. I know that my inspiration and creative energy comes in all or nothing bursts, with essential periods of downtime in between.

I used to fight the downtime, fearing I’d lost my creativity altogether. I learned quickly that for me, pushing on through took me exactly nowhere, something akin to trying to accelerate your car out of an icy ditch.

Now when I feel the surge of creative energy I run with it for as long as it’s there, and when it drops away, which might be ten minutes later or three months later, depending on the project, then I stop.

Mostly at that point, if it’s been a big burst, I’ll lie on the sofa and watch back to back tv series on Netflix. For me that’s as opposite to what I’ve just experienced as I can get; any more passive and I’d be comatose. today: a dream come true studio in my home

What I’m saying, in my meandering way, is that if you are worried that sometimes you just don’t want to make any damn art, or you do but it’s not COMING OUT, or whatever reason you’ve got for taking a creative hiatus, instead of fighting it, try just letting it be what it is.

Go and do something else. Don’t fret and mull over it. Employ your superpowers to gather up enough trust that it’ll come back, because it will.

It never goes away. It can’t die. It’s what you are, however you choose to express it. I have a penchant for paint and charcoal, for you it might be yarn, or fabric, or food, or numbers, or talking to people. Whatever.

Observe your cycles of creativity. Watch them go up and down, because they will. And when it’s time to rest, rest. Because the cycle will come around and you’ll be blazing. 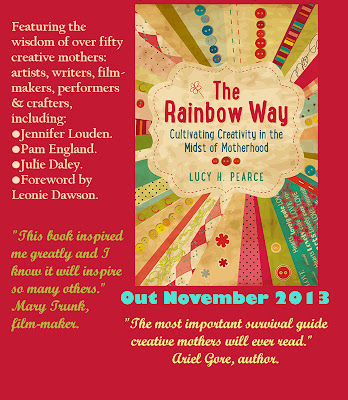 ORDER YOUR SIGNED COPY of
The Rainbow Way direct from the author and receive:

Kindle and paperback editions from Amazon.co.uk

Or order from your local bookshop.