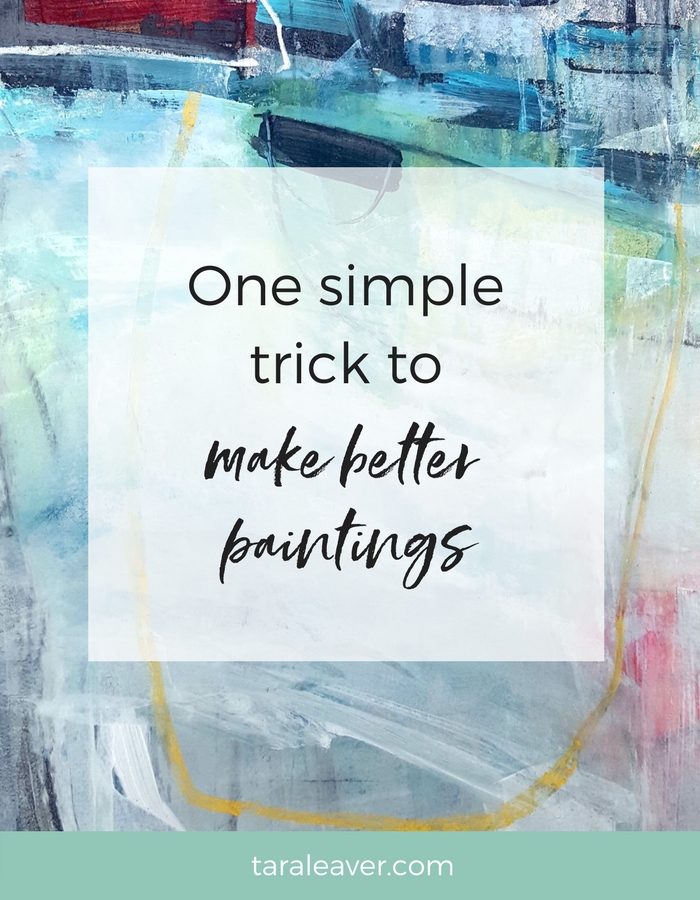 Let me preface this with a caveat – I endeavour not to use qualitative statements about art. No ‘good’, ‘bad’, and therefore also no ‘better’ or ‘worse’. Value judgements are both arbitrary and not helpful, especially when you’re in the early stages of learning your craft.

However, in the name of concise post titles and language that we all understand, I’m using the word ‘better’ for this post. And when I say better, I mean richer, more nuanced, more sophisticated, made with greater understanding and depth, and more expressive of the truth we’re trying to manifest in paint.

Now that’s out of the way, what is this intriguing trick to make better paintings, you ask.

You’re probably going to want to punch me. Here it is:

While you bask in the anticlimax of that, let me explain a bit further, because this is helpful. It’s certainly made a phenomenal difference to my own practice, and I’ve seen it do the same for others.

In the early days of making or rediscovering our art, we generally have less confidence. There’s an element of beginner’s mind that allows us to play uninhibitedly at times, but I’ve found that that wears off quite quickly for many of us, steeped as we are in an educational system and culture that values good grades and ‘doing well’ over self expression and agenda-free exploration.

This lack of confidence in our abilities to ‘make good art’ {because it has to be good – nay, excellent, right from the start – or we don’t have a right to do it, let alone call ourselves artists, right?!}, combined with inexperience in terms of how to make a painting that works, leads to something I see happen quite often. {And have of course done myself.}

And that is paintings that lack the richness, depth and nuance they might have because they haven’t been pushed far enough.

Although behind that idea of ‘pushing it far enough’ lies an ever increasing wealth of experience and understanding, the act in itself is quite simple and available to all of us in every painting.

What’s interesting is I often hear people talk about the struggle to not overwork their paintings, and while this is definitely a thing that happens, I’ve observed that often the opposite is actually the case.

In fact, I would say that often ‘overworked’ can also mean ‘too far’ by our usual standards, but not actually far enough to get to where we want to be – to that rich and juicy place where a painting really comes together. It’s often making a real mess of a painting and having to resolve it that creates that depth and maturity we’re looking for.

Here’s an example of the difference pushing your painting much further than you thought you could, or than feels comfortable, can make:

Sharon Bruster, the creator of these, is a member of my private Facebook group, and kindly let me share this set of images with you to demonstrate my point.

Let’s break it down and see how this can work. On the left is the first version Sharon shared with us in the group. She wasn’t as happy with it as she wanted to be, but wasn’t sure what to do to ‘make it work’.

I suggested she just keep going, making playful marks, carrying the colours in the grasses right through to the sky, and bringing more depth to it all with more layers. {I think I was more articulate at the time but can’t seem to find the original post!} Sharon has a really great experimental and open minded approach, {although she’d be the first to tell you she’s not fearless}, so she dived back in and then returned to the group with the second painting.

Definitely richer, but I decided to challenge her to take it even further and just see what happened. I’m fun like that. And then she returned again with the third painting! Evidently there are changes in palette – it’s much warmer now – and adjustments to the composition, demonstrating that pushing a painting will usually take it in a new direction so it’s a good idea to let go of trying to keep it the same.

But look how rich and luscious it feels! There’s a significant difference in depth between the first and third versions – you can feel the greater confidence and understanding. Where the first one is pretty but tentative, the third feels more ‘muscular’, more like an immersive experience for us as the viewer. We can be part of the third, whereas the first keeps us at the surface and doesn’t invite us in in the same way.

What about overworking though?

I know there can be a fine line between pushing a painting to an interesting place and genuinely overworking it. I encourage you to try this ‘keep going’ idea at least from time to time, perhaps on test paintings, paintings that already aren’t working, and those on paper or in a sketchbook, since it’s psychologically easier!

It’s so worth exploring, and even if sometimes it doesn’t work and a painting cannot be rescued, you can learn so much just from the process of challenging yourself to see how far you can go.

“When you begin a picture, you often make some pretty discoveries. You must be on guard against these. Destroy the thing, do it over several times. In each destroying of a beautiful discovery the artist does not really suppress it, but rather transforms it, condenses it, makes it more substantial.” In Abstractify we go into things like this in a little more depth, with more personal and focused support, to gain a really good grounding from which to create your unique art. Click the image on the left to see all the details and sign up!

The course opens periodically for registration; if today isn’t one of those times, you can sign up on the same page to get on the waiting list for the next session!