YSP? I didn’t know what it was either. 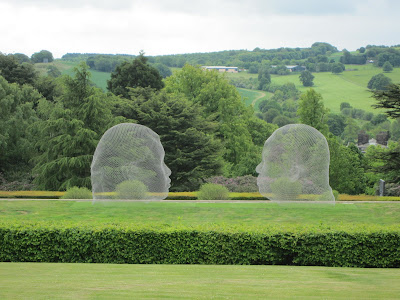 It’s Yorkshire Sculpture Park; I went with Karen when I was staying with her in Leeds on my way back from the retreat. 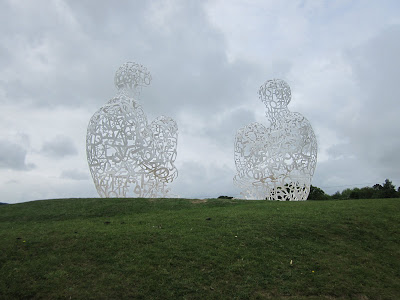 They have plenty of permanent sculptures there, but the main feature was the current exhibition of work by Jaume Plensa, a well known (although not to me) Spanish sculptor. 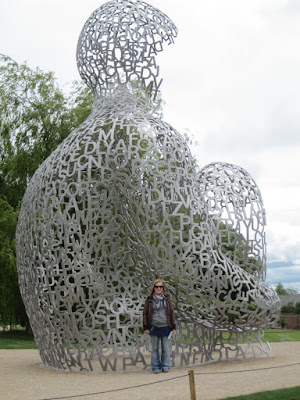 I’m not usually overwhelmed with wonder by sculpture, being more of a 2D colours/layers/texture person. But I LOVED it! 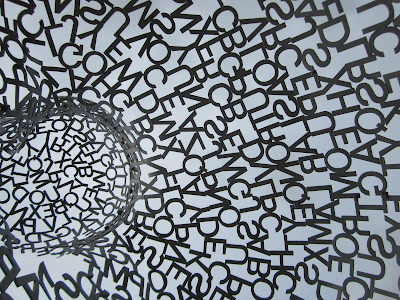 Look at the use of words and letters! 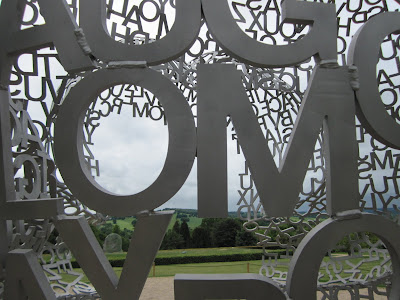 They were incredibly clever, both in construction and meaning. 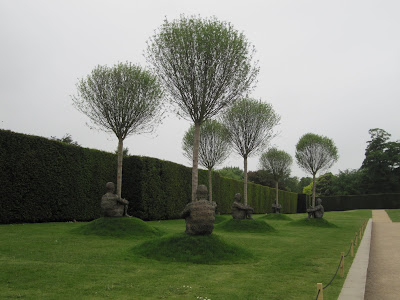 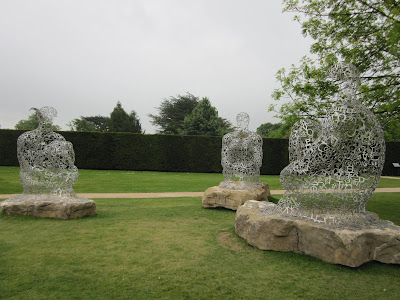 See how there are letters from many languages – Hebrew, Japanese, Chinese, Arabic, English. 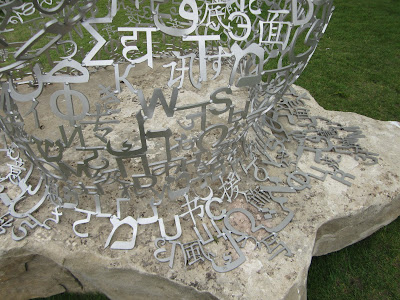 Inside, we found this curtain of letters. When you run your hands along it it sounds like wind chimes. There were words and phrases in various languages, some of which didn’t seem to make much sense, but it looked and sounded beautiful. 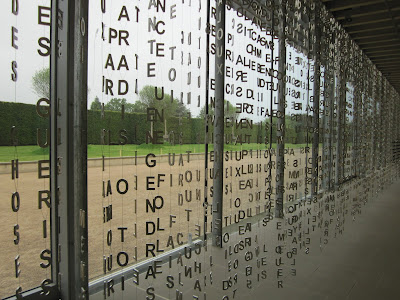 Then there were a series of rooms, which one by one took my breath away. In this one there were three figures, lit from inside and attached to the walls with their hands over eyes, ears and mouth, like the monkeys. 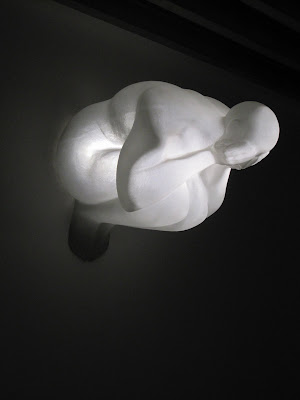 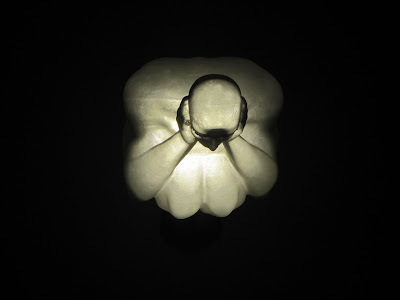 This room literally made me gasp. The heads were cut from alabaster, and had a ghostly, slightly transparent quality. The closed eyes made you feel you’d entered a room full of people dreaming. 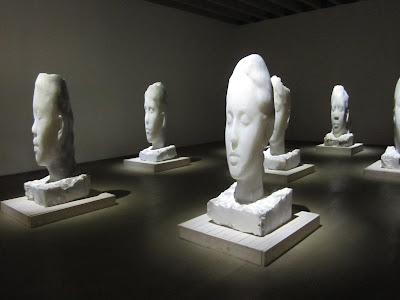 It was magical and beautiful and very slightly unsettling, but in a good way. 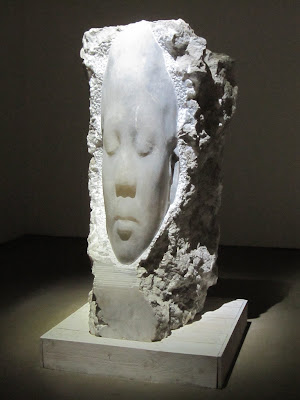 I couldn’t believe how smooth the faces were despite the rough stone they’d come from. It was like watching the rock give birth to something serene and heavenly. 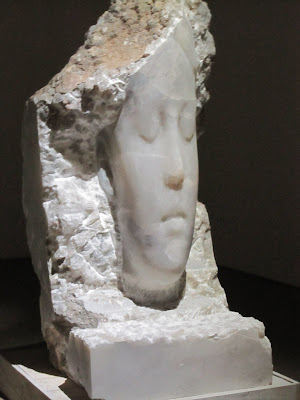 In this room three enormous ‘dreaming’ heads on a bed of marble pebbles had words like ‘anxiety’ and ‘panic ‘ engraved into their faces. 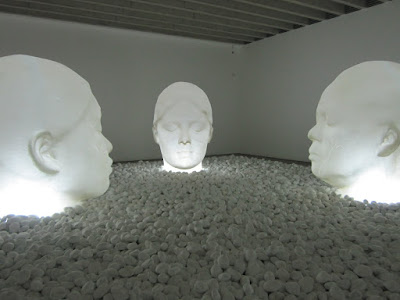 In this room you could bang the gongs; they made a rich, vibrating sound that went right through you. 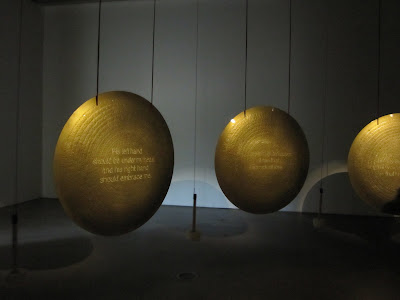 They were all inscribed with sentences that looked like they had come from the Bible, but he may have made them up. There was plenty of information on each piece and the thinking behind it, but as interesting as that was I also liked to bring my own feelings to it. 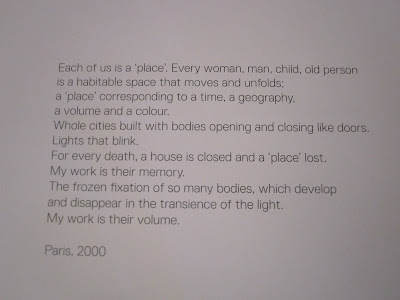 These were some miniature sculptures in glass cases. Lettering is so beautiful. Sigh. 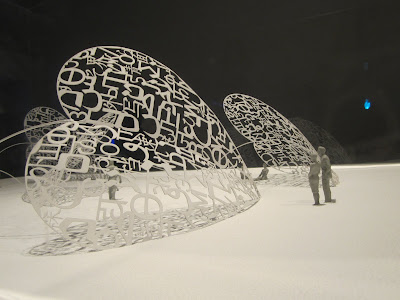 We spent some time in the enormous grounds of the park; I particularly liked this tree house! 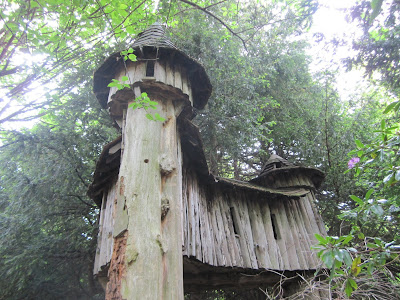 With it’s little fairy door. It made me think of the Magic Faraway Tree by Enid Blyton, or something from Harry Potter. 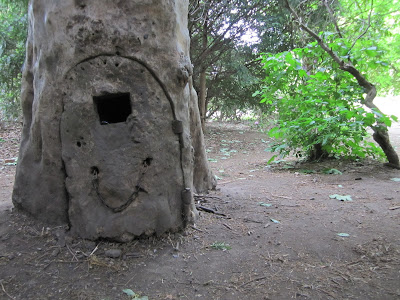 This is the ‘Ha Ha Bridge’. It took me a few moments to understand why it was called that! 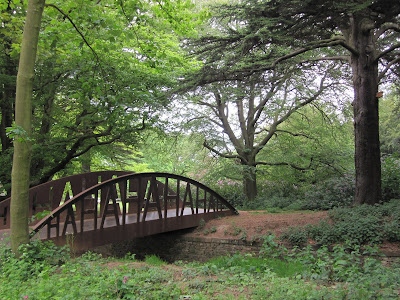 And no post of mine would be complete without a circle, right?! This one is particularly beautiful to me. 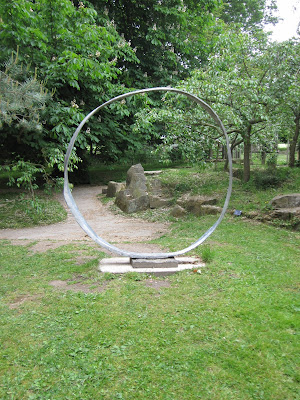