Do What You Love: Part II

The painting class! I’m dividing this into two or it’ll be image overload. Here’s our classroom. 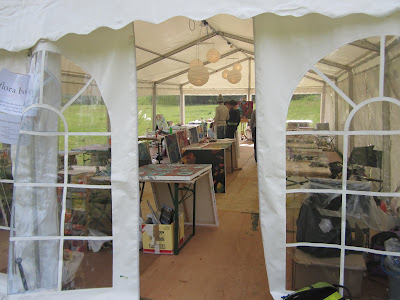 At the end of Day 1 we discussed what we’d done so far in the field. 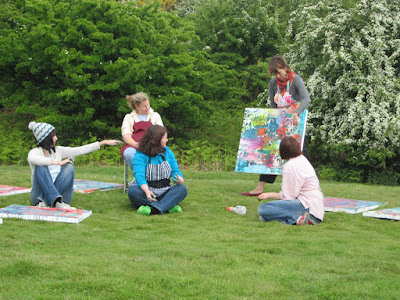 Thanks to Kat for the following two photos. 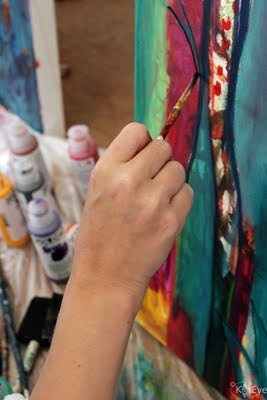 This is Carissa and Juliette, no doubt discussing the finer points of painting with your fingers. 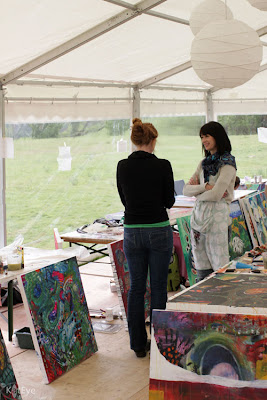 Some of my classmates. See the lady in the turquoise jumper and stripey apron (centre)? That’s Rhiannon, one of my roomies. She does amazing things with polaroids. 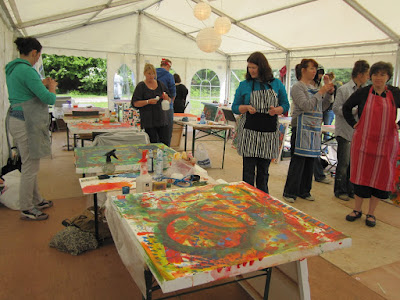 And this would be me, in the zone. 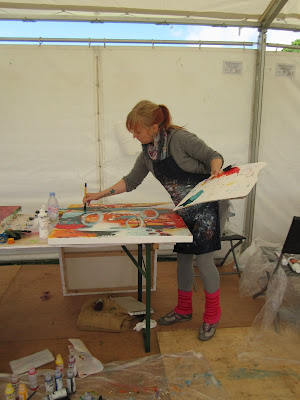 I took photos as I went along, like I usually do. Of course now I’m in a slight muddle about which layers are which painting….

So here is the first thing we did on the first of our three canvases; get two colours on there, spray some water, smoosh it all around. 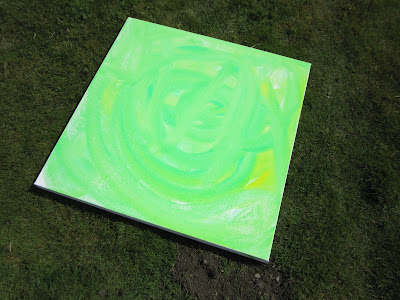 Just to get rid of the white, which can be a bit daunting as we know. Then we tried all sorts of different ways of making marks, prompted by Flora and some great music. Flora had us painting on each other’s work too, so each canvas had something we’d all added. (It’s all about the non attachment.) I found this incredibly liberating. 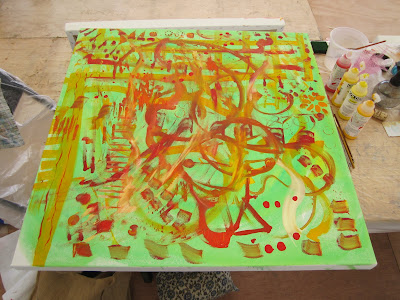 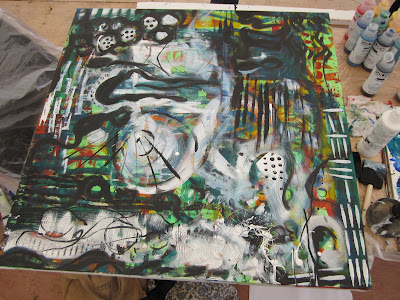 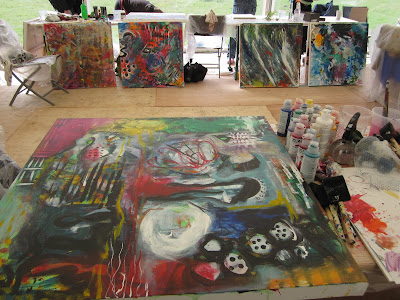 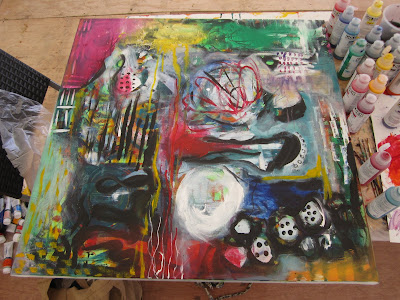 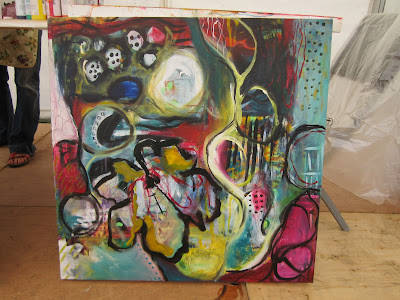 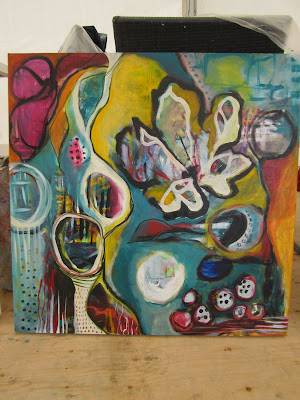 On Day 2 Flora made us give one of our paintings to the person on our left, for keeps. This was the second exercise in practising non attachment, and was quite a challenge for several of us I think. Here’s the one I gave away… 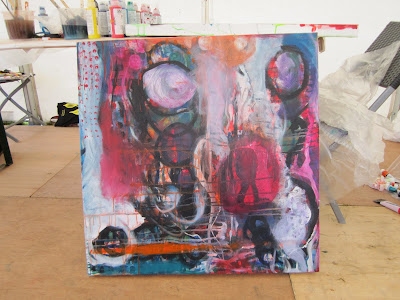 And here’s the one I received. To be honest I didn’t find it that hard. Whatever we gave or received was probably going to get entirely covered anyway. (I’m SO zen.) 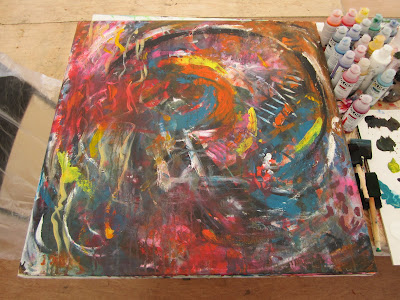 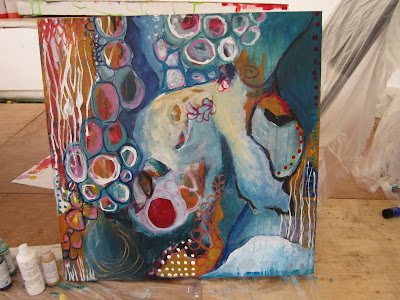 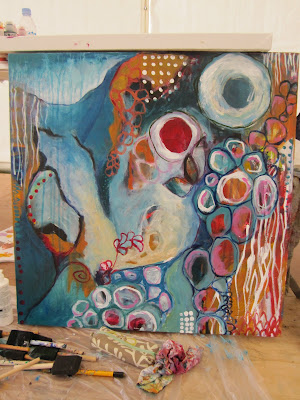 There don’t seem to be a lot of photos of the process of this one.

Here are some pictures of the progression of Flora’s painting, which she used to demonstrate techniques. 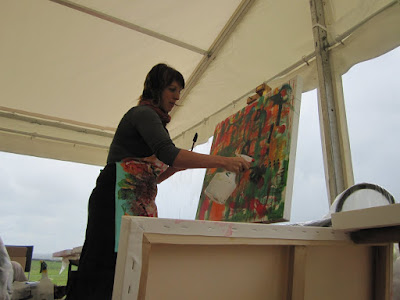 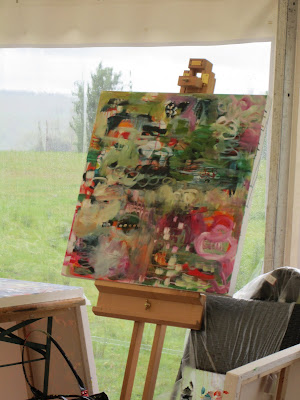 We learned really useful things like how to pull a painting together, how to pull out the bits you love and cover what you don’t, and the ‘frosting layer’, which I loved, because it was about finishing a painting which you may know I often struggle with. 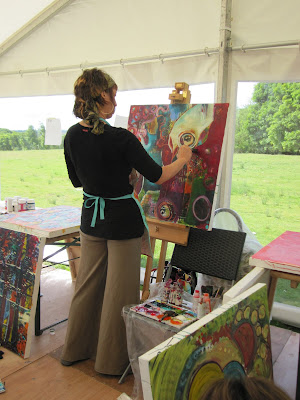 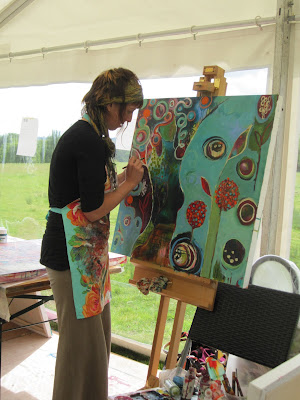 Here it is looking almost finished. On the final evening Flora auctioned her painting. I had told more people than I’d realised how much I wished I could win it; I don’t think I really believed I would, after all I wasn’t the only person who would have loved to. 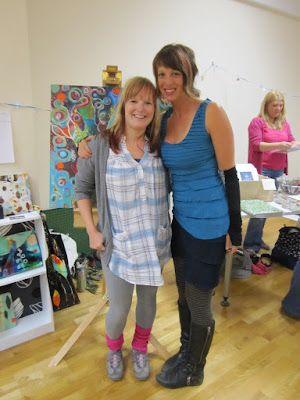 But then I did! I was mucho surprised and quite embarrassed what with everyone looking at me and people going ‘yay!’. I was quite overwhelmed actually. It is already one of my greatest treasures; I will post a photo when I’ve hung it.

Tomorrow the progression of my third and final painting, plus a bit more about the final Gallery Night…