A lot of my ‘stuff’ is coming up lately. 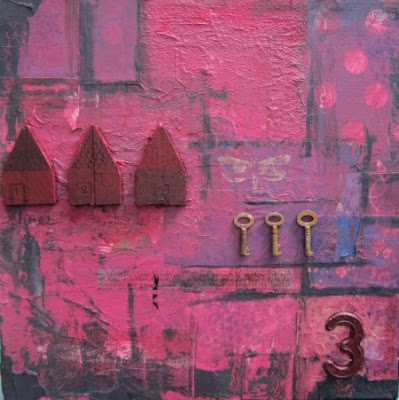 This is a painting I did a while ago, called ‘Three’, which does not please me. So for the purposes of my metaphor, this is old stuff from the past.

My biggest work is clearing myself out at the moment, which is really the emotional and spiritual (and sometimes physical) equivalent of getting on the biggest rollercoaster ever built, but not actually knowing how big it is till you’re already strapped in and on your way, ie. you passed the point of no return waaaaaay back, you just didn’t know it at the time. 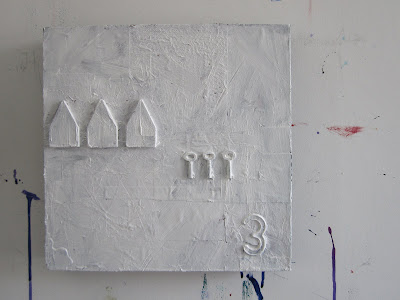 Which is probably for the best or you might’ve chickened out. Mind you, I probably wouldn’t have actually; not because I’m never scared but I routinely seem to do things that other people think take ‘guts’. And I love change! 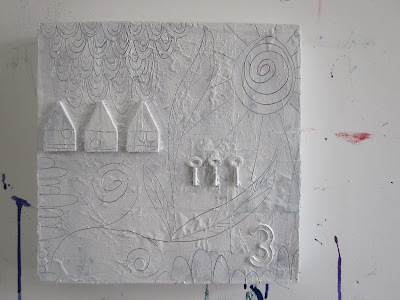 We have nothing to lose at this point so let’s play. First we’ll draw into the wet gesso with a pencil.

If I had a pound for every time someone had said to me ‘you’re so brave’ I could buy myself a little island with a hammock and a lifetime supply of chocolate buttons. Stuff like starting a business, jumping out of a plane, ending a relationship with someone I was still in love with. That kind of thing. To me these things are nothing to do with guts (well, maybe that last one); I either want to do them or need to do them or both, and that’s it. I can’t claim any great courage! 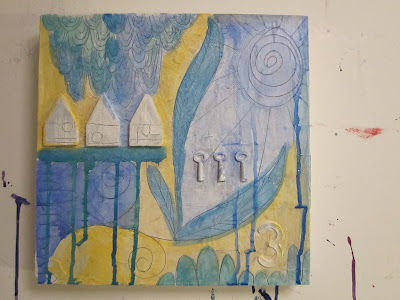 Now we’ll sling some watered down acrylic on there because we’ve been sort of interested by that for ages and we may as well try it on our new clean slate.

So anyway, where was I going with this…. ah yes, stuff. So you do the work and the stuff comes up, which is great because who wants to hold onto old crap that doesn’t serve you and is hindering you from becoming and offering your best self to the world? The stuff coming up is not fun, exactly, but each time you deal with the latest thing, it’s gone, you’re done and you’ve gone up a level, even if sometimes it feels like you’ve actually fallen down a hole and you can’t see where the bloody hell you are let alone where you’re going. 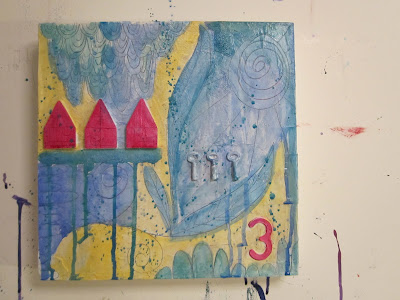 Uh oh, a hole. The painting looks like a three year old did it, with three year old style primary colours. It’s all just a bit not right. The splattering was fun though.

In my mind the work looks like one of those graphs that heart monitors make, just a lot less regular. There’s up, there’s down, and there’s the bit I probably find the most challenging, the plateau. My teacher laughs at me when I’m plateauing because my ego has a field day and I get very stroppy and impatient with myself for my perceived lack of progress. 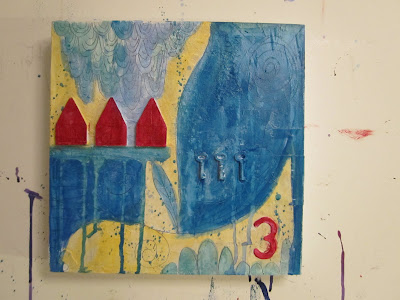 ick. I love colour but not primaries like this. What is Ugly Phase to me may not look ugly to you but I am SO uncomfortable right now.

It’s usually when I don’t think I can bear it much longer that something happens. Generally a big downer. So we look at it and we see what’s uncomfortable and we clean up. 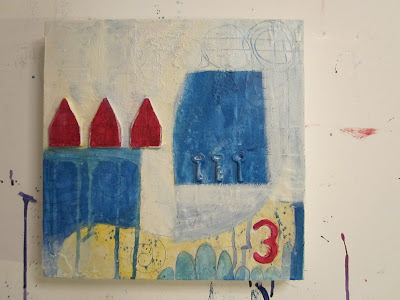 with white gesso, which we also can scribble into with the end of the brush.

We ‘put things in place’. God is in the details after all. We must master the ordinary before we can do the big stuff. (Although apparently everything is the same size but that’s another story.) There’ll be some affirmations and some healing, a lot of talking and smoothing out of kinks. 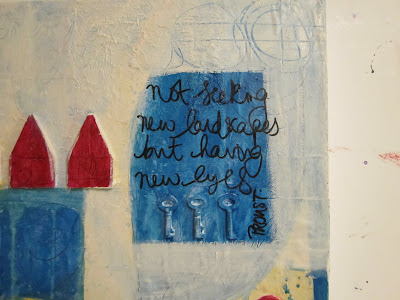 a truncated quote from Proust about how the real voyage of discovery is not about seeking new landscapes but having new eyes.

You can always try new things. 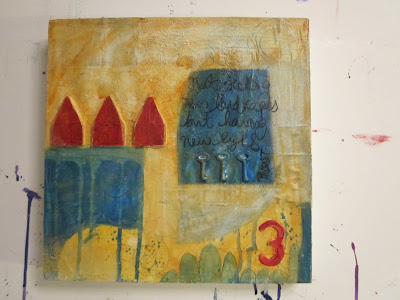 like adding some nickel azo gold to dirty it up a bit. 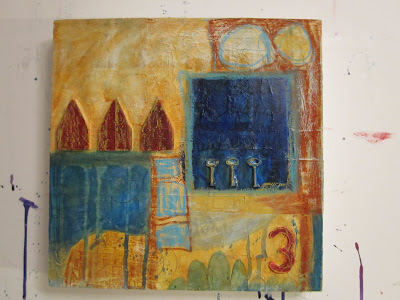 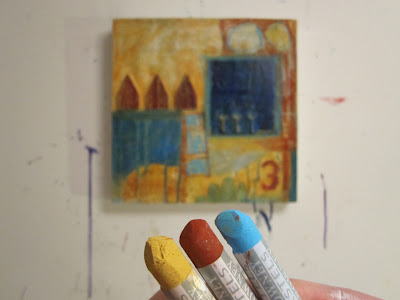 in colours you would never normally use together.

You just keep going, one foot in front of the other, and the picture starts to come into focus, like when you twist the lens on a camera. 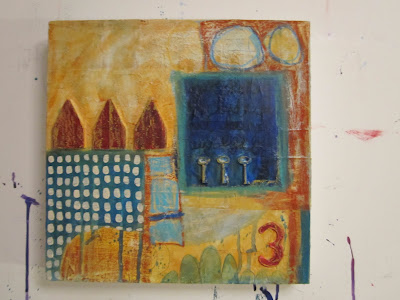 And even though it looks nothing like you thought it might, it feels good, there’s a sensation of having worked through something and come out the other side. And it’s a long way up from where you started. 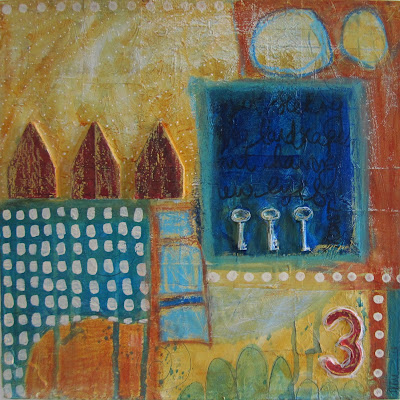